Tag I am It. 15 Fascinating Facts

Sweet Cassie at Primitive and Proper tagged me to play this game.  I had a little time this morning and I didn’t want to disappoint her so here we go.  I will bore amaze you with details about me.

1. I am afraid to close my eyes in the shower.  Too many scary movies.

3.  When I was in high school I lived in a pier and beam house.  A skunk got under our house and our dog went under the house to get the skunk.  The skunk sprayed and the the smell filtered up into the house.  My clothes smelled kinda skunky for a long time.

4.  My first car was a 1964 VW bug with a sunroof.  I bought it myself.  I rolled it on a highway.  Although I wasn’t wearing a seat belt I only got a scratch on my nose.

5.  The car I had to drive while waiting to  get my VW bug was the $100 Falcon.  My mom paid $100 for an old Falcon.  It caught on fire the day she showed me how to drive it.  She beat out the fire with a hairbrush and said all was good and still wanted me to drive it.  The windshield wipers didn’t work, the speedometer went back and forth from 0 to 100 so you didn’t know how fast you were going, it wouldn’t go in reverse sometimes, the headliner was held up by ducky diaper pins

and the gear shift gave me a blister because the handle was missing. She fixed that when she duct taped a door knob on it.  Can you say embarrassing and dangerous?  Thank goodness I only had to drive it for a month.

7.  I only  have one child. A 12 yr old boy.  I didn’t want to find out what I was having while pregnant, but  the other day my son found his baby socks he wore home from the hospital.  The socks had  little blue squares with a  bear on them.  I bought them before he was born and decorated his room in navy gingham and bears so I must have somehow known he would be a boy.  And as I mentioned before I have never been a fan of the color blue.

8.  I can’t sing.  Not at all and I am really embarrassed to sing in front of anyone, but my son.  One day I was singing as we got into the car and my son said, “Mom, you have such a nice voice.  I love your voice.”  I am thinking awww how sweet.  Then my son says, “But it doesn’t sing so well.”

9.  I want to live on a “farm” in the country in about 6 to 8 years.  I would love for it to be a place with tress, lakes and ponds.  I will have to move from my current city but still stay in Texas.  I want to own a donkey and chickens.  Maybe a pot bellied pig too.

10.  I held the record in elementary for the longest flex arm hang and the most sit ups in 2 minutes.  I was very athletic when I was young, but then it all went away in junior high school.

12.  My mom’s mom is a hoarder and so is my dad’s mom.  They truly are.  I am not close to either one of them, but I have seen their homes.  My dad’s mom had beams that ran across her living room ceiling.  They were covered end to end every beam with wind chimes.  My aunt (her daughter) has a pic of it. 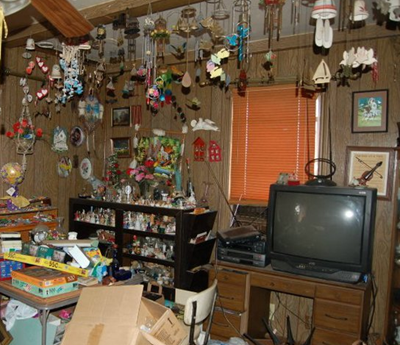 I am glad I didn’t get the hoarder gene.

13.  I have mentioned this fact before.  I don’t do it to get sympathy, but to show that life can be good no matter what happened in the past.  My dad shot my mother in the abdomen while she was pregnant with me and we both lived.  I still get amazed that my dad could do that and that we survived it.  My young and dumb mom stayed married to him for 5 more years.  At least I got my sister Kim out of it. She is on the left and I am on the right.  She is 5 yrs younger than me.

I don’t know if my dad is dead or alive.  The last info I have on him was his arrest because he ran a meth lab.  There was a photo of him in the an Oklahoma paper.  It is crazy how scary he looks.

That’s his girlfriend on the left.  I am so glad I am not like him, but I do have crazy hair like him when I get up in the mornings.

I am proud of the person I am despite him, however,  I am kinda nervous that I shared this with you.

14.  My dad also had another daughter, LaJuana, that my sister Kim helped raise during another time when my dad was in prison.  LaJuana moved back with him when he got out, but she no longer has anything to do with him either. Despite him, she is a great person too.  She is the best mom and expecting her 2nd child.  Here she is with her 2 yr old.

I have other brothers and sisters by him.  One sister that is older and 2 brothers.  I don’t know where they live.  LaJauna told me that the girlfriend in the photo above also had a baby but CPS took it away.  So I guess there is one more out there.

15. I decided a couple of years ago I was going to run a 5k.  I have done a handful of them since.

Now I have to tag 5 people.

Mandi @ Tidbits from the Tremaynes

Stacy @ Not Just A Housewife

Posted by Tracy's Trinkets and Treasures at 9:29 AM